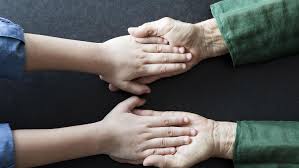 Can feeling like you’re giving back to younger generations improve your health and well-being?  We conducted a study in order to examine this question of whether experimentally increasing older adults’ feelings of generativity – or concern and activity dedicated to the well-being of others, especially younger generations – would lead to improved health outcomes.  In our study, older women (mean age = 71, range 60-86) were randomized into two experimental conditions: a generativity condition, in which they wrote about their life experiences and advice intended to be shared with middle-aged adults, or a control condition, in which they wrote about descriptive, neutral topics.  Participants in both conditions wrote about these topics once a week for 6 weeks. Directly before and after the intervention, participants had blood drawn to assess biological markers of inflammation, and they also reported on their physical, social, and mental well-being.

Overall, we found that the intervention did indeed improve health outcomes.  First, women in the generativity intervention, compared to those in the control condition, reported improved well-being.  For example, they reported participating in more social activities, as well as decreases in psychological distress (feelings of stress, anxiety, and depression).  Interestingly, participants who had more positive expectations of aging and mental health at baseline – that is, those that were more likely to disagree with statements such as “it’s normal to be depressed when you are old” – also reported greater social support and decreased loneliness as a result of the generativity intervention.  This suggests that people’s pre-existing expectations and thoughts about aging may play a role in how they respond to these types of interventions.  Finally, we found the generativity condition led to decreases in inflammatory biology.  Given that heightened inflammation is involved in many diseases of aging, this decrease as a result of the intervention may have broad implications for its impact on health in an older population.

Together, these findings from our study suggest that increasing older adults’ feelings of generativity, or feeling that they are connected to and giving back to younger generations, may improve their health and well-being, including at a biological level.  This kind of low-cost, low-effort intervention would be easy to implement on a large scale and could ultimately have a large impact on older adults’ health and well-being.